Today's adventures included setting up an Etsy shop.  This is something that I have been wanting to do for a few years.  I made my first listing!


This SUMMER sign was created using a rustic piece of reclaimed wood.  I believe the wood was once a fence board!  It was weathered perfectly so my husband sanded it down a little to clean it up and then I added the SUMMER letters that I painted.  I painted them using Amy Howard Indian Summer Blue One Step Paint.  The wood is 18.5"x5.5".  The metal flowers and the SUMMER letters came from Joann's Crafts.  The sign also includes a hanger on the back.  I love creating items using reclaimed wood and mixed media.  The cute lantern you see is from Goodwill.  It is actually missing the bottom piece but the color matched the sign and it looked pretty cute sitting on the rustic old ladder sitting on my front porch (long enough to take a few photos!)

Thanks for taking time to check out my listing on Etsy Listing.  Stay tuned for more items for sale and some DIY ideas!

Posted by Savvy Middle Sister at 11:48 PM No comments:

I have been a bit absent from my blogging for a year or so.  When I am crafting or cooking the thought constantly goes through my mind that I should be putting things here for you all to see.  I am pledging to you today that I will post more frequently.  I love to share recipes and cooking tips. Sometimes I even take the step by step photos to share and then life happens and my blogging tasks get put by the wayside.  I have lots of craft ideas and tips and to share and again, I allow life to stop me.

When I say "life happens" what I mean is that I choose time with grandkids and other family, time to craft with friends, working with pictures and in my scrapbooks.  I even completed several quilts over the last few years. Quilting has been a life goal of mine so this was a major step for me. I am a complete novice quilter but I am happy with my finished projects and thankful for friends that are experts that have shared their skills with me.  Stay tuned... More to come...

Posted by Savvy Middle Sister at 9:26 PM No comments:

BBQ Pulled Pork in the crockpot is a great meal that lasts for several days around my house.  I cooked up about 10 pounds of it in the crockpot to serve at a baby shower and only half of it was eaten.  We had pulled pork tacos a few times during the week. I love leftovers but only for a day or two so I decided to make a pizza with the remaining leftover pulled pork.

Cook on low in crockpot for 6-7 hours

To make the Pulled Pork Tacos we just used some of the meat in some tortillas, threw some grated cheese on top and enjoyed.

The Pulled Pork Pizza was the best leftover invention.  I basically just used what I had in my refrigerator.

1.  Spread a thin layer of BBQ sauce over the crust.
2.  Sprinkle minced garlic over the sauce.
3.  Add a layer of spinach leaves.
4.   Sprinkle grated cheese over the top.  Spread evenly.
5.  Spread pulled pork, feta cheese, and pineapple chunks evenly over the pizza.

Bake according to crust package directions.
Posted by Savvy Middle Sister at 8:04 PM No comments:

Fall is one my favorite seasons.  I love the crisp morning air and the cool evenings.  My favorite days are the ones that you need to turn the heat on in your car in the morning and then you need the windows down on the way home.  I spent an 84 degree fall day picking the pumpkins and cutting down the cornstalks in my garden. 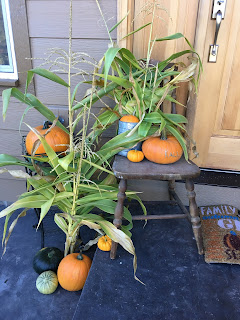 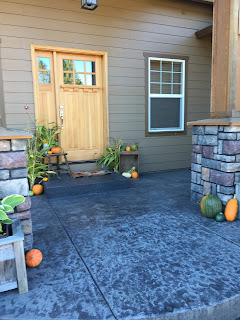 I used an old chair and an old crate in my display this year.  My corn didn't really grow so I ended up with "mini" corn stalks.  They were pretty cute.  Some of them were so small I put them into an old watering can and placed them on the chair.  Can you find Kallie's etched pumpkin? 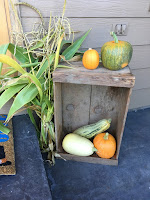 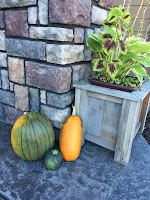 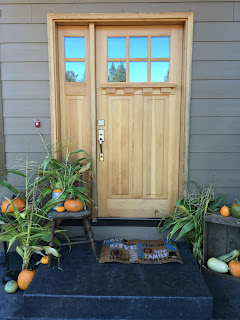 My pumpkins did not grow very well this year so I ended up with a small amount and none of the gourds grew. Front Porch Decorating Day is one of the best days of the whole year.

Posted by Savvy Middle Sister at 9:53 PM No comments:

This recipe is a family favorite all summer long and into the fall and winter because they freeze well.

I have also adapted this recipe to be gluten free by using Namaste Gluten Free Flour Blend.  I have tried a couple of different gluten free flour blends and this one seems to come out the best.
I learned several years back that these muffins will get eaten from the freezer but if I shred the zucchini in the summer and then freeze it I rarely pull the shredded zucchini out of the freezer and make things with it. It is worth a little extra effort in the summer to just make the muffins.  If I do use frozen, shredded zucchini then I like to add a little oatmeal to the recipe to absorb some of the liquid.

Posted by Savvy Middle Sister at 4:43 PM No comments:

I like to add a Spanakopita Burger to our menu periodically.  It is a moist burger with lots of flavor.  I use the Rachel Ray recipe from food.com as a starting point but I don't follow the recipe exactly.  I also like to serve them with Sweet Potato Fries.

Here is a list of the changes that I make...
-I use fresh spinach and just tear it into small pieces.  I never have frozen spinach.
-I use a yellow onion instead of a red onion because I rarely have a red onion on hand.
-I don't measure anything so my seasonings vary a bit each time I make these.
-These freeze pretty well.  I usually do a quick freeze and then use my Food Saver to seal them up.

Sweet Potato Fries
Cut 2-3 Sweet Potatoes into fries.  Toss with Olive Oil and Sea Salt. Bake in 350' oven for about 20 minutes. Stir half-way through.  To make fries a little crispy, cook under the broiler for 5-8 minutes after baking.
Note:  Try to cut the fries about the same size so they cook evenly.

Posted by Savvy Middle Sister at 9:19 PM No comments:

I created this recipe awhile back so that I could use up some cooked chicken that was in my freezer.  I like to boil a whole chicken and save the broth and then I pull all of the meat off the bone and use it.  The last time I did this I had some leftover cooked chicken so I put a couple of cups of it in the freezer.  I decided to make some chicken and rice soup with it and since I didn't have a recipe at my fingertips, I made one up!  It was delicious so, I am sharing it with all of you.

This recipe could easily be made gluten free. I used heavy cream and it could be eliminated. I chose to use it because I had some in the refrigerator that was leftover from a different recipe and I didn't want to waste it and, I was craving a creamy soup!

The recipe made about 10 cups of soups.  My husband and I had it for several dinners and lunches and I would have thrown the leftovers in the freezer but we ate it all in just a few days!