Nothing says fall like a Pumpkin Baking Day!  My step-daughter, Kendahl, and I spent a whole afternoon trying out new pumpkin recipes that we found on Pinterest.  We started our baking day with Pumpkin Spice drinks from Starbuck's.

We had a fun afternoon trying out new recipes.  Being in the kitchen with others is one of the things that I enjoy the most.  Of course, we had to sample each of our treats.  My favorite recipe was the Melt in your Mouth Pumpkin Cookies.  They were frosted and we both agreed that they would be great with mini chocolate chips added.  I loved these cookies so much that I made them again using Bob's Red Mill 1 to 1 Gluten Free Flour.  The gluten free cookies were just as amazing.  They stayed round and didn't really flatten out. I ended up cooking them a little longer.

The Pumpkin Bars were also amazing.  The recipe said to use a 9x9 pan. I think if I made these again that I would use a larger pan so the bars are thinner.  I would also like to try them using gluten free flour.  I liked the cream cheese frosting but any buttercream frosting would also be delicious.

We had Gluten Free Pumpkin Pancakes for dinner. They were tasty.  We used real maple syrup instead of the Cinnamon Syrup on the recipe.  I was tempted to add some chopped toasted walnuts but I didn't!  These tasted very "gourmet", like they might be served at a bed and breakfast or something!

The Cinnamon and Sugar Pumpkin Muffins were probably my least favorite, however, they were still good.  We made two batches so we could try one batch using gluten free flour.  We could have cooked the gluten free batch a little longer.  I would also cut back on the spices and add only half the molasses.  The molasses and the spices almost overpower the pumpkin and I would rather taste the pumpkin.

I would definitely try all of these again and the cookies and the bars will be my "go-to" recipes this fall!

I served up this delicious taco soup at an event yesterday.  It is always a hit.  I told the others at the event that I would post it to my blog so, here it is!  For this batch I used fresh garden tomatoes instead of my home-canned tomatoes. I quartered about 6 pounds of tomatoes.  I also used 2 bell peppers and a couple of hot peppers straight from the garden.  This recipe is a family favorite! 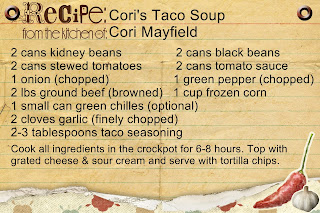