Tonight I created a delicious pork chop recipe that I am definitely going to make again.  Who doesn't love applesauce with their pork chops?  I wanted that same idea but I cooked it all together.  I poured a jar of homemade apple pie filling over the top of my pork chops. I only had 3 pork chops so I used a 9x9 pan.  I had enough pie filling that I could have covered up to 6 pork chops in a larger pan. We ate the "baked apples" instead of applesauce.  We also had some home canned green beans. 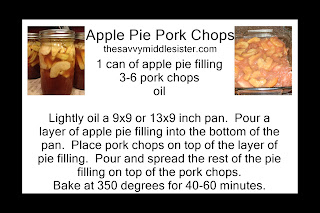 The house smelled amazing while the pork chops were cooking.

As the new year begins I would like to consistently try new recipes.  I am constantly adding more and more recipes to my Pinterest board so I going to make a point this year to try at least one new recipe a month and then share my experiences with all of you.

This month I tried Slow Cooker Tomato Basil Parmesan Soup from 365 Days of Slow Cooking.  I found it on Pinterest.

I ended up having some friends over for dinner so I was a bit nervous about trying something new.  Much to my surprise this recipe was a hit.  I made a few changes to the recipe and next time I will make a few more.  My husband and I ended up eating it all week.  We had several dinners and lunches.

This is what I did that was different from what was on the recipe.

I used Bob's Red Mill 1 to 1 Gluten Free Flour for my roux. I had never done this before and it made a nice thick roux.  I then whisked in one cup of the soup from the crockpot and then added 3 additional cups.  I then decided to add it all back into the sauce pot instead of back into the crockpot.  I added the parmesan cheese and the I used 1% milk instead of the half and half.  I was afraid that my soup might not be very thick but it ended up being fine.

I also used the recommendation to puree the soup in the blender.  I should have done it a little longer because my soup had small chunks of vegetables. It tasted fine but it changed the texture.  Next time I will definitely puree it longer and try to thicken the soup a bit more.

I am excited to try this with fresh garden tomatoes next fall! I may even roast them first and throw in a few fresh bell peppers.


Posted by Savvy Middle Sister at 10:26 PM No comments: